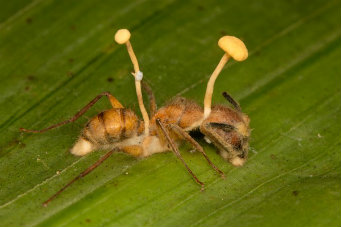 What Exactly is Cordyceps?

The Cordyceps Fungus is in the family of ascomycetefungior sac fungi which encompasses approximately 400 known species of fungi. This number is, however, not exhaustive. The name ‘Cordyceps’ is Latin-the first part, Cord, means ‘club’ and the second part, ceps, means ‘head’.

Cordyceps is produced by a strange pairing between insect and fungus. The substance grows from the mummified remains of insect larvae that are found on the heads of a subterranean caterpillar that lives at high altitudes in the Qinghi-Tibetan plateau. Unfortunately, due to the expense and difficulty of harvesting natural Cordyceps, most commercial varieties have been artificially cultivated.

Despite its bizarre provenance, Cordyceps is not only non-toxic but safe and even nutritious to consume. According to the International Journal of Medicinal Mushrooms, the fungus contains essential amino acids, several essential B-complex vitamins and the vitamins E and K. Beneficial fatty acids – including oleic acid, the same healthful monounsaturated fatty acid found in olives – are also present.

However, cordyceps’ most significant feature may be its nucleosides. Researchers believe that nucleosides, key signaling molecules in the body, help to fight cancer; nucleoside analogues are medically used as anticancer and antiviral agents. In addition, Cordyceps contains many nucleosides, including guanidine and guanosine; the most potent – and most studied – of these seems to be 3-deoxyadenosine, which researchers have dubbed cordycepin.

Cordyceps, scientifically known as Cordyceps sinensis, is one of the most important and revered herbal treatments in Chinese Traditional Medicine (CTM) – where it is known as semitake, aweto, yartsu gunbu and Dong Chong Xia. The first recorded use of Cordyceps took place in the 15th century; it is very likely that it was being used for many centuries before that. Usually prescribed to restore energy, boost the immune system, promote longevity, and improve quality of life, Cordyceps has also been used in CTM to treat serious ailments, including chronic obstructive pulmonary disease and kidney failure.

According to Memorial Sloan-Kettering Cancer Center (MSKCC), Cordyceps has antitumor, radioprotective, and antidiabetic effects. MSKCC cites a study in which Cordyceps made the cancer medication cisplatin more toxic to lung cancer cells, and confirms that Cordyceps can also help infection-fighting lymphocytes live longer, increase levels of T helper cells, reduce tumor cell proliferation and boost the activity of natural killer cells. Finally, the medical center reports that some studies have shown that Cordyceps has caused cancer symptoms to improve, in addition to helping patients better tolerate the rigors of chemotherapy.

Is There Proof That Cordyceps Kill Cancer Cells?

Although human studies are limited, animal and test tube research have shown time and time again that Cordyceps has the capacity to destroy cancer cells, help normalize low white blood cell count occurring as a result of chemotherapy, and even make certain medications more toxic to cancer cells.

In a study published in 2008 in Experimental Biology and Medicine, researchers explored the effects of Cordyceps on mice that had low counts of infection-fighting white blood cells in their bone marrow as a result of being given the chemotherapy drug Taxol. Mice given Cordyceps daily – for three weeks – had their white blood cell counts restored to normal ranges; the white blood cells counts in the non-Cordyceps group were dramatically lower, sometimes by as much as 50 percent.

Concluding that Cordyceps enhance recovery from clinically-induced leucopenia, the team remarked that the substance achieves a positive effect on osteoblast differentiation – an essential factor in new bone formation – by acting on proteins and core binding factors that are needed to produce new bone cells.

In a cell study published in Cancer Chemotherapy and Pharmacology in 2007, cordycepin extracted from Cordyceps had an apoptopic effect on human oral cancer cells – causing them to self-destruct. Researchers used flow cytometry and viability assays to show that the survival of cancer cells significantly decreased with the administration of Cordyceps, and noted that the effects became more dramatic as the dose and duration of Cordyceps increased.

The Cordyceps are said to control hypoglycaemic activity. They are able to control the blood sugar levels ensuring it does not fall below medically acceptable levels. They also catalyse the anti-depressant workings of the body. As for particular diseases, Cordyceps is said to be able to heal Hepatitis B since they are strong antibacterial fungi. They are also credited with having antiviral powers, killing pneumococcal viruses in addition to the hepatitis B virus. They also attack the golden staph and herpes viruses. The medicinal power of Cordyceps also inhibits the vitality of leukocytes.

The Cordyceps are said to detoxify the body and a detoxified body is the last place disease causing organisms want to dwell. The mushroom consequently ensures proper circulation of blood within the body, where all tissues are properly fed. A lot of research is being done on the Caterpillar mushroom and many people agree that the mushroom has great potential in providing new drugs to treat the tough diseases like cancer. As it were, oncologists all over the world continue to recommend the use of the Cordyceps as complementary treatment to conventional ones. In various instances, Cordyceps was able to inhibit the growth of an existing tumor or clear it completely.

For patients undergoing chemotherapy and radiation, they gave their bodies a fresh boost of energy when they consumed Cordyceps in the course of treatment. Kidney disorders have also been rectified to a significant degree by the use of Cordyceps. Where abnormal blood pressure was the issue, research showed that the patient took Condyceps and the blood pressure fell by 15%. This consequently reduced the protein levels burdening the kidney. Further observation in the same research was that superoxide dismutase increased while lipoperoxyde serum reduced. This neutralised the free radicals and reduced the risk of damaging the kidney.

On one occasion, 57 renal patients were put on clinical observation. Their renal problem had been triggered by the use of gentamicin, an antibiotic. A section of the patients took 4 to 5 millilitres of Cordyceps each day. Another section of the patients was put on conventional medication. While the group on conventional treatment recovered 45% of their kidney working capacity, the group on Cordyceps had their kidney recovery go up to 89%. The recovery periods for the two groups were just as varied, the one on Cordyceps being comparatively shorter.

The Cordycep mushroom apparently has many medicinal benefits that some other mushrooms may not have. They are said to have 77 micro and macro substances, 80 varied enzymes, invaluable amino acids, vitamins, minerals and unsaturated fats, all of which give the mushroom the rich medicinal value that it has.

Together with the benefits already described, the mushroom helps patients who have insulin problems, helps reduce anxiety by soothing the nervous system and helps fight respiratory problems like bronchitis. Cordyceps boosts the overall wellbeing of the body.

What is The Best Way to Consume Cordyceps?

Cordyceps is currently marketed as a health food supplement and nutraceutical, and can be found in health food stores or online. Most practitioners recommend taking between 2 to 3 grams a day, with food. Cordyceps is generally considered safe. Of course, you should consult your doctor before taking it, especially if you take blood thinners or medication for diabetes. Don’t use Cordyceps to treat cancer unless under the guidance of a well-trained physician. And, finally, make sure you obtain Cordyceps from a reputable supplier – as some samples have been found to be contaminated with lead.

Although a parasitic fungus may seem an unlikely ally in the road to recover from a cancer diagnosis. Cordyceps could turn out to be a very important – and even a lifesaving player. Once again, Mother Nature has supplied a beneficial substance well worth attention and further study.